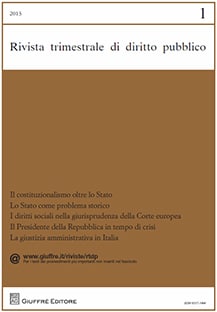 Editorial Director: Sabino Cassese
Editorial Vice-Director: Bernardo Giorgio Mattarella
Board of Editors: Stefano Battini, Aldo Sandulli, Giulio Vesperini
Managing Editor: Lorenzo Casini
Web Editors: Andrea Averardi, Bruno Carotti, Lorenzo Casini, Davide Ragone, Patrizio Rubechini, Giulio Vesperini
Archive
The evolution of the Italian model of administrative justice is described in this article as a “monistically driven dualism”. According to the liberal monistic conception, which in Italy dates back to 1865, judicial review of administrative actions is to be carried out by regular civil courts. Such a conception has always remained latent in the system and, paradoxically, its presence has shaped the Italian dualistic system, acting as a driving force of its progressive improvement: at first, during the formative period of the system, the prospect of a judicial review carried out by ordinary courts has stimulated, as a reaction, the very creation of an administrative court having the power to review administrative action; next, in recent times, the same prospect has encouraged making such a court ever more independent, as well as increasingly able to offer to citizens all judicial remedies that may be needed in “public law” disputes. The final outcome of such a path could be the emergence of a system of ordinary courts specialized in judicial review of administrative action: that is to say, a system of courts that has become as independent as the ordinary courts, but at the same time as “interfering” as a special administrative court can be.