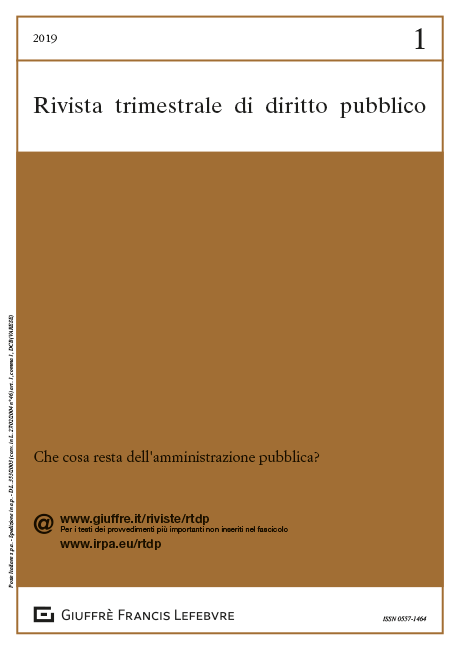 The Rivista trimestrale di diritto pubblico (in English, Public Law Quarterly Review) was founded in 1951 and has since been the main scientific point of reference for Italian constitutional and administrative law scholars. Over the years it has been directed by the most renowned Italian public law scholars of the twentieth century: Guido Zanobini since  foundation through 1965, Massimo Severo Giannini from 1965 to 2000, Sabino Cassese from 2000 to date.

The Review’s principal focus is on publishing salient and original essays in public and administrative law, written by leading academics as well as promising young scholars. In addition to essays, the journal features short articles, legal news, book reviews, bibliographic profiles and information. The Review also publishes yearly reports, on EU law and on Italian constitutional and administrative law – which provide a brief overview of the main tendencies and events occurring in the field during the year under examination -, reviews of documents and parliamentary inquiries, and commentaries of the main constitutional and administrative law books. The Review requires authors to commit to not publish elsewhere the works that it accepts for publication. The approval of articles follows a rigorous and highly selective process of peer review.

What Remains of the Public Administration

Politics and Administration: «The Italian Style»

How the Activities of the Court of Auditors Affect Public Administrations

The activities of the Court of Auditors can pervade the daily actions of public administrations, especially at the functional level. This essay examines how, with regard to the main categories of activity carried out by the Court (checks, accounting agents and ascertainment of administrative responsibility), the administrations are conditioned in many aspects of their action, including on the basis of conditioned reflexes or — more or less founded — fear. This analysis takes into account the enormous complexity of the regulatory framework governing controls on public administrations and malfunctions that arise also due to the overlapping of tasks and roles. The persistent crisis of public finances exacerbates such a situation. However, at the territorial level, where the Court’s activities cannot have the same pervasiveness that they reach at central level, inopportune uses of public resources are more frequent and widespread.
Hide the abstractabstract
Find out how to subscribe
Go to the journal

The Rivista trimestrale di diritto pubblico (in English, Public Law Quarterly Review) was founded in 1951 and has since been the main scientific point of reference for Italian constitutional and administrative law scholars.