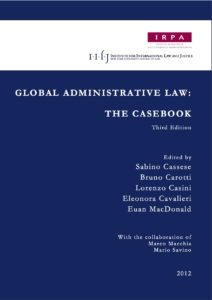 with the collaboration of Marco Macchia and Mario Savino

This book is an attempt to analyse global administrative law through the elaboration and examination of a number of different cases and case-studies. The architecture of its contents mirrors the characteristics of this field. In order to fully grasp global administrative law, however, it is important also to have a sound understanding of the broader governance context in which it is situated. This volume attempts to provide this also.

The first chapter (States and Global Administrations in Context) examines the emergence of administrative law beyond the State and the rise of global administration. On one hand, it focuses on the notion of the State and the implications for this of the formation of a global administrative space.  Topics analysed include the concept of “the State” in a globalized world; the application of this concept to the Palestinian case; and the rise of the global regulatory State in the South. On the other hand, it deals with the proliferation and differentiation of IOs, offering a classification of global institutions into four different types: formal intergovernmental organizations (e.g., the UN, WIPO, UNESCO, WHO, ILO, UNICEF, IOM, or even ASEAN); hybrid public-private organizations and private bodies exercising public functions (e.g. ICANN, the WADA, ISO, or the Global Fund); transgovernmental and transnational networks (such as the G-8, the International Conference on Harmonization (ICH) ASEAN International Investment Agreements, or the Basel Committee); complex forms of governance, such as hybrid, multi-level or informal global regulatory regimes (e.g. global and national proceedings under the International Patent Cooperation Treaty, decision-making procedures in fisheries governance, the composite interaction of UNESCO advisory bodies in the World Heritage Convention, or the clean development mechanism).

The second chapter (Global Standards) addresses one of the most important activities of global administrative bodies: standard-setting. Global standards are generally addressed to national governments; this does not, however, mean that private parties are not affected by them. For example, the food that we eat is subject worldwide to the standards of the above-mentioned Codex Alimentarius Commission. The standards established by the Forced Labour Convention (1930) are addressed to national governments, but also affect private individuals. Such standards provide a clear example of the spread of global regulatory regimes, and of the ways in which they interconnect; in addition, they illustrate well the various kinds of interactions between the global and domestic levels. These standards can be set either by private bodies (as happens, for example, in the accounting sector) or by formal IGOs (such as the labour standards approved by the ILO); they can be considered either as regulatory devices (e.g., international accounting standard setting, the ICAO Standards, or the IAEA standards) a technology of global governance (as in the cases of the PISA Rankings in educational performance, the Rule of Law Index or quality standards for pharmaceuticals) or both (as in the case of credit ratings).

Analysing, this time, the activity of global administrative bodies, the contributions in chapter three (Global Administrative Law Principles) illustrate the increasing spread of principles established by global actors and/or global norms, which must be respected within national administrative procedures. The main examples can be found within the WTO system, such as the duty to disclose information (here dealt with in relation to antidumping duties) the duty to give reasons (definitive safeguard measures) and transparency (subsidies and countervailing measures). Other important principles in the global context include legality (as demonstrated by the Compliance Committee of the Aarhus Convention) reasonableness and proportionality (applied by the NAFTA Binational Panel) and the review of discretionary power (as with, for example, the resolution of disputes relating to bilateral investment treaties by ICSID arbitration panels). A central focus of many contributions is also on participatory rights: many global bodies, such as the ITLOS, the World Bank Inspection Panel, and the World Bank Office of the Compliance Advisor Ombudsman (CAO) have relied – albeit in different ways – upon principles of participation and due process.

In connection with the increasing activities of IOs there is another issue of real significance: the enforcement of global decisions, whether “administrative” or “judicial” in nature. From this perspective, chapter four (The Enforcement of Global Decisions) focuses on five examples that highlight the difficulties that might be encountered in the implementation of such decisions, which can, in some circumstances, result in some global norms or findings being only partially or ambiguously enforced.

Chapter five (Judicial Globalization) considers another fundamental topic in contemporary global governance: the rise of judicial globalization. Since the 1990s, the number of international courts and tribunals has grown rapidly. Previously, there were only a handful of operative international courts; in the last fifteen years, however more than twenty new permanent adjudicative mechanisms – and quasi-judicial bodies – have been established. One of the most important global dispute settlement bodies is that of the WTO, reflected in the attention it receives in various contributions to this volume This chapter, however, broadens this focus significantly, analyzing other examples of courts or quasi-judicial bodies, such the international administrative tribunals, the ITLOS, ICSID arbitral tribunals, and the alternative dispute resolution mechanisms created by the ICANN. Lastly, the impact of human rights law – namely of the European Convention of Human Rights and its Court – on supranational regimes is also considered.

The presence of many sectoral regimes, however, does not only give rise to various forms of cooperation or interaction; it also creates conflict. This happens, in particular, when separate jurisdictions reciprocally overlap, as is brought out in the four examples presented in chapter six (Conflicting Jurisdictions), dealing with the relations between global law and EU law, the Schengen Information System, the governance of cyberspace, and the international antitrust regime, respectively. Furthermore, these conflicts can often play out before global or national courts.

Within the many functions performed by IOs and their regimes, one of the most significant is the promotion of democracy through different means. This is why chapter seven (Global Dimensions of Democracy) examines global dimensions of democracy, by taking into account four different perspectives: promoting democracy and human rights globally, such as the case of the United Nations Democracy Fund (UNDEF) and the European Instrument for Democracy and Human Rights (EIDHR) the OAS, and the Foreign Aid Standards and the Electoral Democratic Standards elaborated by the Venice Commission; civil society and multinational corporations, such as the OECD Guidelines for Multinational Enterprises to Responsible Business Conduct; the media, in cases relating to internet censorship and to Wikileaks; and global security, examining, for example, the reconstruction of Iraq and the limits on the use of force.

As noted above, alongside global institutions and global regulatory regimes, a range of different regional organizations have emerged. Amongst these, the EU represents undoubtedly the most legally sophisticated example of integration. Chapter eight (Europe in the Global Space), therefore, examines the significance of Europe in the global legal space. To this end, several cases are examined, such as the EU’s external action after the Lisbon Treaty, the EU comitology reform, the relationship between the EU and the UN Convention of the Law of the Sea, the European System of Financial Supervision, the Data Protection Directive as a model for global regimes, and the interactions between EU and global administrative law more generally.

The whole text of the GAL Casebook in Kindle Format is available here.

I. States and Global Administrations in Context

IV. The Enforcement of Global Decisions

VIII. Europe in the Global Space