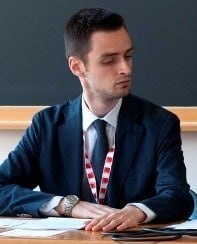 Ph.D at the University of Siena

In 2011, he was declared eligible to hold the office of Assistant of the Gev – Expert Groups on Assessment (Area 12 – Legal Studies) appointed by the Anvur – National Agency for the Evaluation of Universities and Research Institutes.

He took part in several research projects (for the Italian National School of Government, for the Institute for Research on Public Administration, for Lottomatica) and editorial projects (the editing the fourth edition of the book Istituzioni di diritto amministrativo, the editing of the third edition of the Global Administrative Law Casebook: Cases, Materials, Issues, partnership with the Institute for International Law and Justice – IILJ of the New York University School of Law, the updating of the second edition of the International Encyclopaedia of Laws).

He spent some study periods abroad (Oxford, Dublin, Paris, Tunis) a specializing period at the Postgraduate School of Economics and International Relations of the University of the Sacred Heart in Milan in 2007 and a specialization period at the University of Trento (2011). He has been collaborating with the Italian Environmental Fund in 2006 and he is member of the International Association for Political Science Students (from 2007, in section Alumni from 2010).