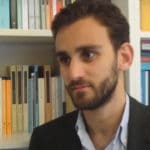 Ph.D. at the University of Pavia

He is qualified as an Associate Professor of Administrative Law (Italian National Scientific Habilitation/2016, with unanimity vote).

He has been visiting researcher at Columbia Law School in New York and visiting fellow at City, University of London, School of Law in London.

From 2015 to 2018 he was a Post-Doctoral Researcher at The Law School of the University of Roma Tre.

He is a Fellow of the Institute for research on public administration (IRPA), of Italian Association of European Law Scholars (AISDUE).  and a Member of the International Society of Public Law (ICON’s) and of The Academic Association for Contemporary European Studies (UACES).

He is admitted to the Italian Bar, Court of Appeal of Rome and he has worked as a consultant for the National Anti-Corruption Authority and for the transparency and evaluation of government (ANAC).

His publications include a book on the role of the State in developing and implementing industrial policies, and several essays and articles on, inter alia, citizen’s participation to public decision-making process, public companies and spending review, administrative due process, accountability in the public sector and cultural property law.