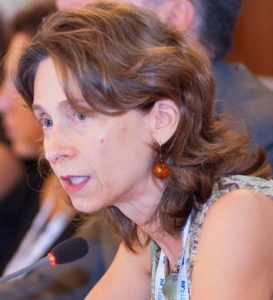 Senior manager in the Presidency of the Council of Ministers

Pia Marconi, has been appointed as a senior manager in the Department of Public Administration of the Presidency of the Council of Ministers since May 1997. She is currently Director General of the Office for Public Administration Modernization, after having been director of the Office of Administration Efficiency (1997 – 2001), Innovation (2001-2006), and Simplification (2006 – 2008).  Her responsibilities have been involving the management of programs to promote innovation and simplification and to enhance public sector performance, in the framework of an ongoing reform process.
She has a wide experience in representing the Department of Public Administration in several committees and working groups both at national and international levels. Among the latter ones: the EU Directors General network for the quality of legislation (1998 – 2000); the EU Directors General of Public Administration Network (1997–2002); the Board of Governors of the European Institute of Public Administration (1998–2002); the Steering Committee of the European Public Sector Award (EPSA) within the European Institute of Public Administration (EIPA).  Since 1998 she has been the Italian delegate in the Public Governance Committee of the OECD, of which she was the Chair (2002 – 2006) and currently is member of the Bureau (since November 2012).
She has participated in several international conferences and seminars on public management as either speaker, or chaiperson or member of scientific committees, including: the International Workshop, on “Government Output and Productivity measurement: lessons from the international experience”, Rome, 23-24 April 2009; the OECD Forum on Key Indicators-Session  on “Measuring the effectiveness of public services”, Palermo, November 2004; 2nd Quality Conference for public administrations in the EU, Copenhagen, October 2002; the International Public Management Conference 2002, Siena, June 2002; the Third Global Forum on Reinventing Government, Naples,March 2001; the Ecole National d’Administration (ENA), Strasbourg, June 1999; Ier Forum de la gestion publique, Paris, December 1998; New York University, New York, May 1998; the British Council, New Public management Seminars, Rome, February 1998.
She has written and published several articles on public administration topics including: citizens participation in government decision making processes, program/performance based budgeting, regulatory impact analysis and government reform in Italy, compliance costs of regulation, quality of service delivery and citizens charter,  government purchasing procedures and prices, decentralized financing of local governments,  the impact of government reform on public expenditure, effectiveness of administrative procedure, the Italian state-aids legislation, the performance of Italian inter-ministerial committees dealing with economic policy and the role of state-owned companies in high-tech sectors.
As a 1998 Eisenhower Fellow she spent two months in the US visiting government agencies at federal, state and local levels of government.
Up until 1997 she worked in the Public Administration Unit of the National Institute of Statistics (Istat) as director of a project aimed at improving statistical information concerning the government. In 1997 she was a lecturer at the University of Macerata, specializing in administrative reform. From 1994 to 1996 she was co-coordinator of a research unit on government procurement policy at the National Institute for Economic Planning (ISPE). Between 1993 and 1994 she served as a member of the technical staff of the Minister of Public Administration.
Ms. Marconi’s early career was spent in the Italian industry with ENI (1983-1984) and the Montedison Group (1985-1993) where she became the Deputy Director of the Corporate Economic Research Department. In 1988, she was seconded by Montedison at the European Institute of Technology in Paris.
Born in Recanati (Marche, Italy) in 1958, Ms. Marconi studied Political Science at the University of Macerata where she graduated in 1982, maximum cum laude. In 1982-83, she attended a one year post graduate course at the Istao (Istituto Adriano Olivetti) School of Management. She has a daughter born in 2000.