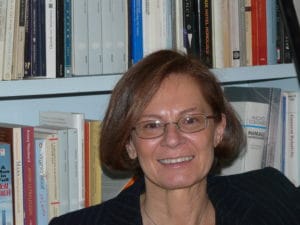 Professor at the University of “Roma Tre”

Fluency in English and French.

1991- 2002: Member of the Steering Committe of the EGPA – European Group of Public Administration.

1999- 2002: Member of the Steering Committee of the Italian Association of Professors of Administrative Law

1979-83: participates in the following researches:

– National and Regional Policies in Agriculture (sponsored by the National Council for Research – CNR);

– Implementation of National Politicies in Transportation, Health and Telecommunication (sponsored by the Institut fur Angewandte Sozialforschung, University of Cologne);

1981: holds a Scolarship at the Advanced School for Civil Servants;

1985-1994: under the supervision of Prof. S. Cassese and the aegis og the Institute of Public Law, Law School, University of Rome, she is the chief coordinator of several research projects on: national steering power and regional governments; reform of financial markets regulation; regulation of non-profit organizations; competition and anti-trust regulation.

1994-1997: she is the coordinator of two research projects, on the general principle of european administrative law and on national implementation of european law

1998-2000: she is the coordinator of a research project on the reform of Italian universities

2000-2002: she is the coordinator of a research project on public administration in federal systems (Germany, Spain, Usa)

1986-1992: holds a regular course on “Regions and local government” for the Advanced School of Administration, University of Rome.

1987: visits for a month the Institut d’Etudes Politiques, Paris.

1989: visits for a month the London School of Economics.

1998: visits for a month St. John’s College, University of Cambridge

2001: visits for a month Max Planck Institut in Heidelberg

2002: visits for a month the London School of Economics Consulting Activities

1984-1985: Expert for the Committee for Public Expenditure, Department of Treasury.

1991-1992: Member of the Committee for the implementation of the administrative procedure Act, Department of Civil Service.

1996- 1997: member of a specially appointed Committee of the National Institute of   Statistics, charged of drawing a plan to census public administration and to draft the first statistical annuary of their activities.

1996- 2000: President of the Commission for Internal Audit, Department of Industry and Trade.

1999- 2001: Advisor to the Special task Force for the implementation of federal reform

1998- 2003: Member of the National Commission for Statistics

2009-2011: member of the National Commission for public performance