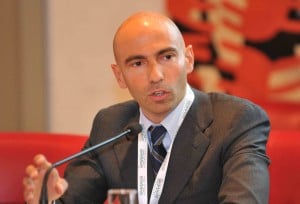 Professor at the University of Rome “Rome Tre”

Giulio Napolitano (1969) is full professor of Administrative Law at the University of “Roma Tre”.

He studied at the Max-Planck-Institut für ausländisches öffentliches Recht und Völkerrecht of Heidelberg (2001-2007) and at the New York University, School of Law (2008, 2010). Currently, he is member of the Board of editors of the European Public Law Review and of the Comparative administrative law network promoted by the Yale Law School.

Among the English language publications there are Towards a European Legal Order for Services of General Economic Interest (2005) and The Role of the State in (and after) the Financial Crisis (2010).

He served as legal counsel of the Prime Minister on Quality of Regulation Affairs (2006-2008). Since April 2009, he is Chairman of the Supervisory Board on Equality of Access to the Telecom Network, appointed by the National Regulatory Authority (AGCOM). He is a consultant of the Italian regulatory authority for the energy sector (AEEG). He is one of the Expert of the Commission encharged by the Italian Government to draft a Global Legal Standard on Business, in the framework of the Italian Presidency of the G8 in 2009. On January 2008 he was invited, as a regulatory affairs expert, to a hearing about the new package on the single market of energy before the European Parliament.

He knows perfectly written and oral English and he has a good knowledge of French and German language.