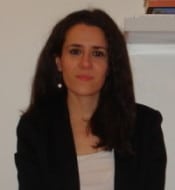 PhD at the IMT School for Advanced Studies Lucca

Cinzia Carmosino (1982) holds a PhD in Management and Development of Cultural Heritage from the IMT School for Advanced Studies Lucca, where she defended a thesis on the legal notions of cultural property (Supervisor: Prof. Lorenzo Casini).

She has been intern at the UNESCO World Heritage Centre (Paris) and worked as a consultant at the International Centre for the Study of the Preservation and Restoration of Cultural Property (ICCROM) in Rome.

She collaborated with the chairs of Town and Country Planning Law, Legislation of Cultural Property and Administrative Law of the University of Rome “Sapienza”.

She took part in several research projects promoted by the Institute for Research on Public Administration (IRPA), concerning global administrative law (2011-2012), the globalization of cultural property (2008-2009), the Italian administrative system (2008-2009).

She is the author of several publications in the field of cultural property.